Mesh is for most of us a pretty new thing. Designers working in offworld 3d are more familiar with the concepts but even then there are considerations and special nuances of the Second Life importer that need to be mastered.

I am going to document a quick project that I undertook this evening in the hope that some might find it useful and perhaps demystifying mesh a little. I should of course note that I am no expert in this field, mesh is a new tool for me and I have only just begun to play with it.

The very first Mesh creation I ever made was produced in Google's Sketchup program. This is a great 3d editing application with a wonderful interface that for the most part does what you expect. However, it is far from ideal for Second Life modelling and can be hard to import and certainly quite costly.

I moved on to Blender, and perhaps I will cover Blender in a later journal entry. I would certainly recommend Gaia Clary's videos on Mesh in Blender over at Machinimatrix but please bear in mind that she is still in the process of producing them and also that the version of Blender changed form her early tutorials.

Today though we will not be using Blender or in fact any offworld tool. Those of you who have produced sculpties in the past will almost certainly have come across the rather excellent Sculpt Studio by TheBlack Box (TBB). TBB has more recently been working with a number of other inworld tool visionaries, Anjin Meili and Inventor Alchemi who were previously involved in some of the ground breaking tools that proved that sculpts could be produced inworld.

The result of this work is Mesh Studio. In some ways Mesh Studio reminds me of another sculptie tool, Sculpt Crafter (SC) by Contagious Republic. SC worked by providing a set of prims each of which held a small script that would report the details of that prim and allow the main script to produce a sculpt map based upon the extents of the shapes. Mesh Studio (MS) takes that idea to a whole new level.

With MS you do not need special prims, there are no restrictions to how you can cut, slice or hollow them. To my knowledge any torture that you can apply can be reproduced by the tool. Neither do you need to have a script in each prim which makes the entire process far simpler. To enable you to build a mesh version of a prim object all you need to do is take a script that is provided and drop it into the root prim. The object then becomes touchable and produces a menu of choices for you, the most important being "Mesh!" which produces a link to a remote server which hosts a zip file in which your mesh has been stored.

Mesh uses a format known as Collada which typically carries a ".dae" suffix to its filenames.

So the aim of this series of entries is to use MS to produce a viable object and to learn as we go.
A long time ago I built a lamp. It was very simple and not very pretty but was based upon a real life lamp made in the early part of the 20th century by a movement known as "Roycroft" part of the Arts and crafts movement. The real lamp looked something like this. My version in Second Life was rather simple, deliberately low prim, and it pre-dated sculpts, or my ability to produce them at least. Just recently in a bid to reduce the prim usage in my undersea home in Babbage I took the opportunity to sculpt a redesigned lamp. The two lamps are shown below the orignal prim only version and the updated sculpt version. 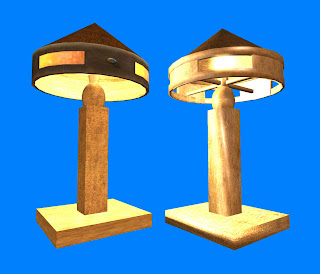 The prim version was 8 prims, the sculpted version (made very simply with Sculpt Crafter) is just 3 prims and is actually more realistically structured, featuring support struts for the shade and a bulb.

The sculpted lamp is actually the booty in my bottle contributed to The Great New Babbage Bar Crawl.

A few days ago I discovered that Mesh Studio existed. It has been around a while it seems but I had managed to not notice its appearance. So I trekked over to the store and bought a copy, I used a few prim based items to experiment.

So today we are going to recreate the Roycroft lamp but as a mesh.

Can we beat 3 prims? Can we make it look better?

You will have to wait to find out I am afraid. Bedtime for Beq.