When is a prim not a prim?

When it's a mesh enabled sculpt....

In previous blog posts I used mesh studio to convert prim built objects into mesh. This ability alone makes for a very convenient and powerful tool, but it effectively places you back in 2007 with respect to the shapes that you have at your disposal. Mesh Studio is extremely good at dealing with prims claiming to be able to convert any conceivable torture into the appropriate mesh, but what about all those occasions where a prim no matter how set upon and tortured it may be, simply will not give the desired results?

One option is to forego the inworld tools and head to Blender or your chosen outworld 3d editor. We will examine this option and the times it makes sense in a future post but for now we will examine another tool that the intrepid Mesh Studio creators have slipped into your toolbox.

We have for many years enjoyed the benefits of sculpted prims, which before mesh gave us much more freedom in the shapes that we built, so much so that many of us depend upon the sculpted to prim for many of our creations. Recognising this dependency, and of course recognising the gaggle of devoted Sculpt Studio owners out there, TheBlack Box and his team have come to our rescue by linking sculpts from Sculpt Studio to mesh studio allowing them to become building blocks in your mesh masterpieces. 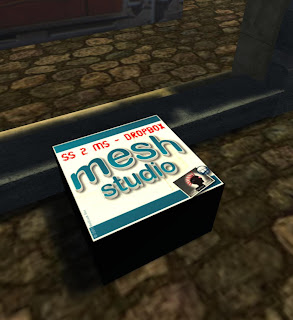 With your Mesh Studio package you will get an object called "SS2MS DropBox". This clever little box of tricks can be rezzed near to your build area. When you need a non-prim building block for your mesh, and especially if you happen to have created such a thing in the past, you need only rez the Sculpt Studio platform, build the item you need, or recreate it from a stored notecard and upload the resulting sculpt texture. 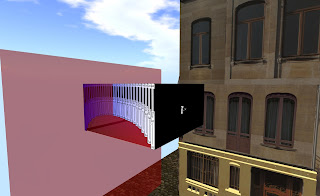 You then simply drop the new texture into the drop box and let it do the work for you. What happens next is rather clever. The dropbox associates the uploaded texture with your recently created artefacts on the SculptStudio server, assuming it finds a match (you should be sure to use a sculpt map generated within the last few hours), it will create a permanent link between that sculpt map and the mesh it represents. 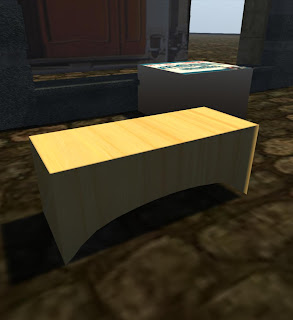 Any prim in the Mesh link set that has a recognised sculpt map will be converted to the appropriate mesh representation and incorporated in the overall mesh. What is more, so long as that sculpt map is sold with the appropriate permissions (full perm) you can even give/sell it to fellow Mesh Studio users as a component.

The images here were just a couple of random shots taken during a current Mesh project to update one of my oldest builds. I'll cover some of that project in later posts I suspect, but for now here is a glimpse of just one fo the many places where the above, very simple, sculpt has been used in a final mesh. 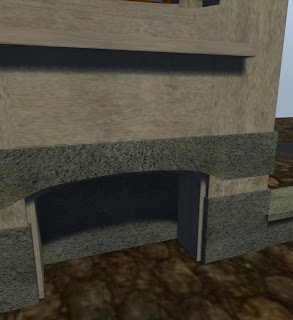