I've been variously dreaming of and promising local mesh for a few years now; it has always been near the top of the TODO list without making it there. Now, finally, and due primarily to the efforts of Vaalith Jinn, who wrote the underlying mechanics for local mesh we are ready to unveil local mesh to the creator community. If Vaalith's name has a familiar ring to it then that may be because Vaalith was the originator of the current local textures feature we've all enjoyed for years.

Local Mesh - What on earth are you talking 'bout Beq?

Local Mesh is to mesh creators what local textures are to all you designers and decorators. Put simply, it allows you to preview a mesh from the Collada file, inworld, where you can texture it and even wear it before uploading it for other users to enjoy.

The next version of Firestorm (coming very soon under our new experimental accelerated release model) will have a "local mesh" option on the build menu. I should note here that this is very much the "first pass" while it has been tested to be functionally stable, there are many rough edges in terms of usability that we hope to address in further work, but we were excited to get this into the hands of our creators sooner rather than later so that we can also incorporate feedback into that future direction.

Selecting the "local mesh" option will pop up a "floater" through which all your local mesh interactions take place. Similarly to the local texture workflow, you create a list of "local" resources that the viewer will monitor. Use the [Add] button to import a DAE as you would normally; if you use properly named files the LODs will be loaded automatically too. 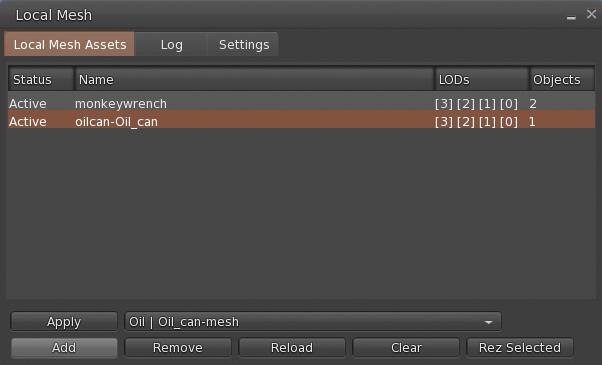 Selecting a loaded mesh from the list of local meshes, while simultaneously editing a full perm mesh "surrogate" will allow you to apply the parameters to the surrogate, making the mesh appear in your viewer. Onlookers will see only the original. You can also use the "rez selected" option to create a "surrogate" in-world and automatically "fill it" with your local mesh goodness.

What about rigged mesh? Bet that doesn't work...

Sorry, you just lost your beer money. Rigged mesh is fully supported, with the only limitation being the need to have your own surrogate mesh (it can be any full perm mesh created by you, in fact, I often use a simple mesh cube). Attach the object and make sure it is open for editing (click on it inworld or through "edit" on the worn tab in your inventory), then just apply your local meshes.

And yes, it even works with Animesh.

How do I update my local meshes?

The real value of local mesh is that we can now edit these and update the DAEs and quickly see the results in-world. Unlike with local textures, we do not at present auto-reload meshes, this is because the complexity of loading a collada file is far higher than that of a simple texture and for this first release it is not something we have supported. Instead, we have a refresh button that will scan all of the locally loaded mesh assets and refresh any that have changed since last refresh.

So are these just the same as real uploads?

In most regards yes. You can apply textures, both from inventory or using local textures; this includes normal maps and specular maps too.

You can resize (except for rigged meshes), move them.

But...keep in mind that what you are really scaling/texturing is the surrogate object and once all this is over that object will lose the mesh override but all the other changes will remain.

One thing you cannot do at present is link them.

OK, and this is just visible to me right?

Yes, only you will be able to see the meshes, other users will see only the normal appearance of the surrogate object (including texture changes etc). This highlights another of the rough edges of this first release. The current "Rez" tool, crates a surrogate prim that will appear to other users (and yourself after a relog) as a small flat panel. In a future update, I plan to have a more concrete and visible placeholder object and ideally a way to rez directly as an attachment too.

Here is what Liz could see while I was taking these photos. 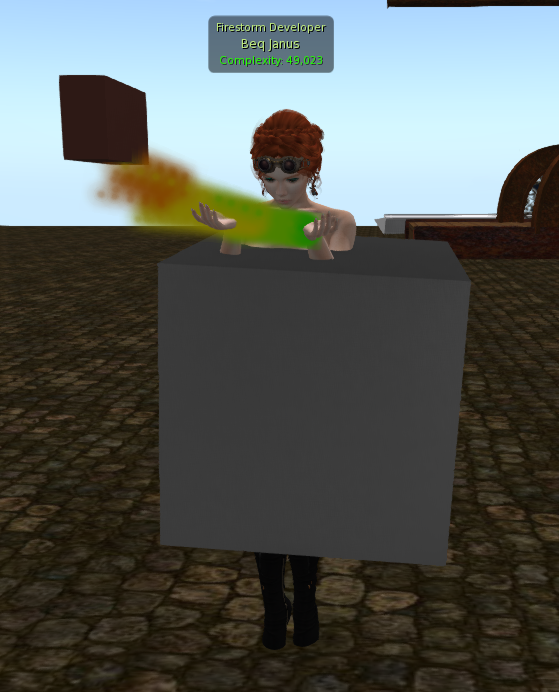 KK, I hear you. It's coming real soon. The new faster release cycle Firestorm should see this available to you in the next week or so.

And a final note with some background

So Beq, if you wanted this so long, why didn't it happen before?

The primary reason for this is that it requires a lot of sustained focus to get from the initial proof of concept to something usable, and as a solitary volunteer developer working in my spare time, there are always distractions, commitments and other more urgent things to address.

The concept b behind local mesh is simple enough once you know how mesh assets work in the viewer; you just have to create a placeholder "Surrogate" and locally "Implant" the mesh into that surrogate prim. However, as soon as you step beyond the bare basics, all the corner cases jump out and demand attention. How do we rez them? Where do we rez them? Where in the workflow should they appear, what happens if there are errors in the mesh? How do linksets work? The whole idea space gets crowded, and then a bug report comes in, or something needs updating on one of my other responsibilities, and the whole thing gets put to one side until "later".

What it needed was someone willing to do much of that initial graft, to not get distracted by the complexities of what might be and just focus on a minimum viable implementation (MVP, yeah, I  know MVI but whatever) with no scope creep and importantly as few other distractions as possible. Early this year, that person appeared in the form of Vaalith Jinn. Vaalith (as noted above) is not entirely new to viewer development, having previously contributed the much loved "local texture" feature. When Vaalith said that they were working on local mesh, I was excited and we discussed our shared vision and where those visions differed we came to compromises and agreed on what the MVP should look like. With occasional back-and-forth discussions, the code grew to a point where, a month or so back, Vaalith presented the initial version for me to integrate. I have since tinkered with it a little to make the user interface a little more standard to FS and to incorporate a basic but functional "rez" function to place a local mesh in-world. We are now ready and excited to unleash this.