I don't wanna Mesh with nobody

OK, I had not planned on this blog but a forum post raised that ugly spectre of LOD Factors and, in the light of a few things that have happened recently, I thought it would be worth a "quick" (yeah right, like Beq does quick) update post.

A few months ago I posted a couple of blogs calling upon the mesh body makers to give us more options of low render overhead bodies. Demonstrating (in extreme terms) the true cost of those individual "alpha-cut" segments on your body, and your poorly optimised rigged hair. By way of illustration here is a couple of screenshots.

There are a couple of things to note before you look

1) Yes, I am running on a stupidly high spec machine. I am also standing in a deliberately uncluttered space. Ignore the FPS

2) This is on a version of Firestorm that is at least one release away. It incorporates some of the impressive performance changes made by the Linden Lab team alongside some of our own tweaks. Right now, you can test the LL version by going to the project viewer download page on secondlife.com. It has bugs, many of them, but by heck, they are fast bugs and the more you can find now, the faster we get our hands on the goodies.

3) What you are seeing here is a new floater (also building on the initial work done at the lab) that will be part of the very next Firestorm release. A proper discussion of this is for another blog on another day, but what you see in the screenshot is the time in microseconds that each of my avatar's attachments is taking to render. On a less powerful machine, these numbers will be considerably higher, but the relative magnitudes will remain broadly the same.

The first image is my regular avatar. Beq is wearing a gorgeous Lelutka EVOX head, a zippy Slink Redux Hourglass body (with the petite augment), some arse kicker boots for good measure and a bunch of other bits and pieces. The Redux Slink body is notable for having a very limited number of "segments". 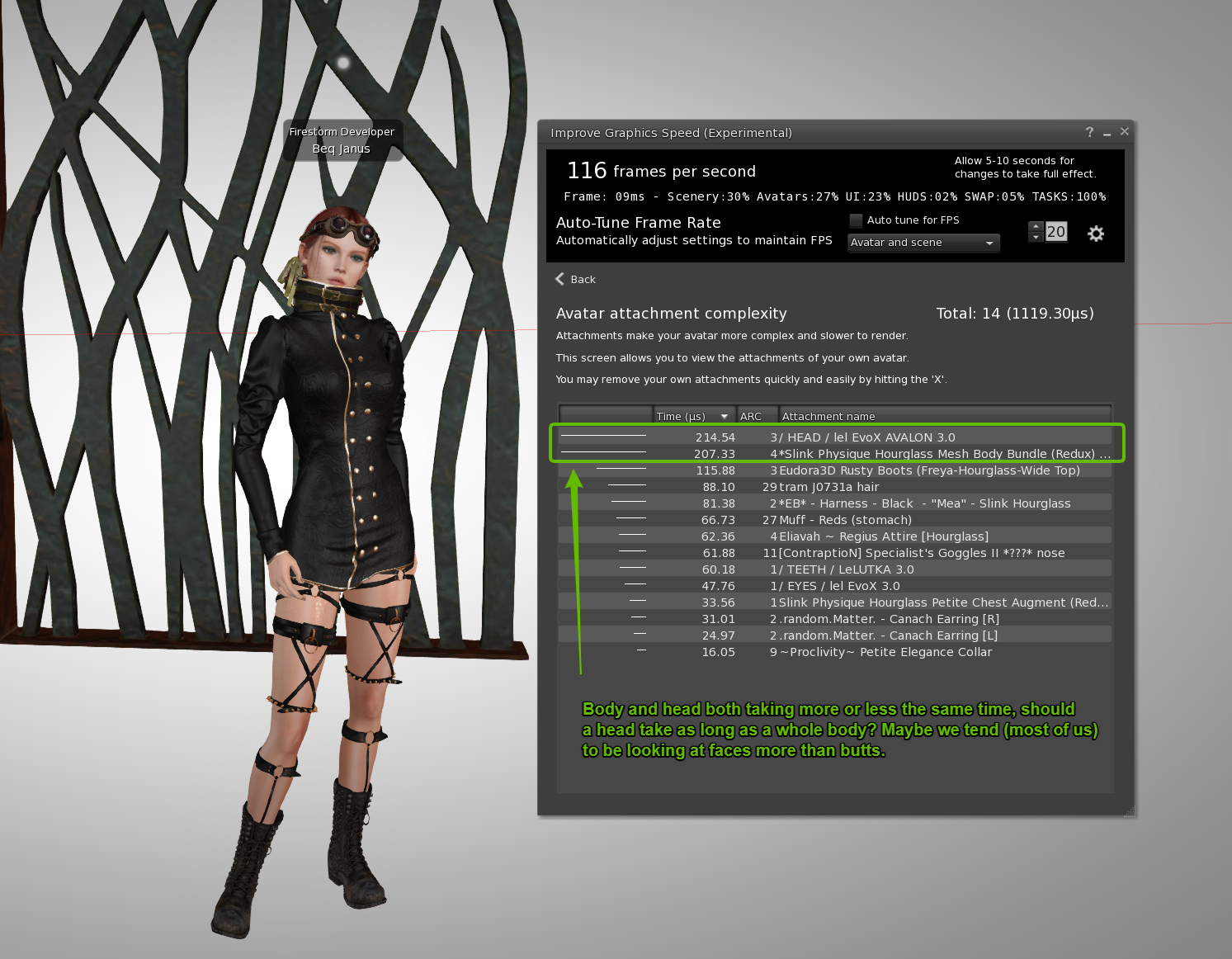 Beq slips on a demonstration copy of a well-known very popular and very segmented body... 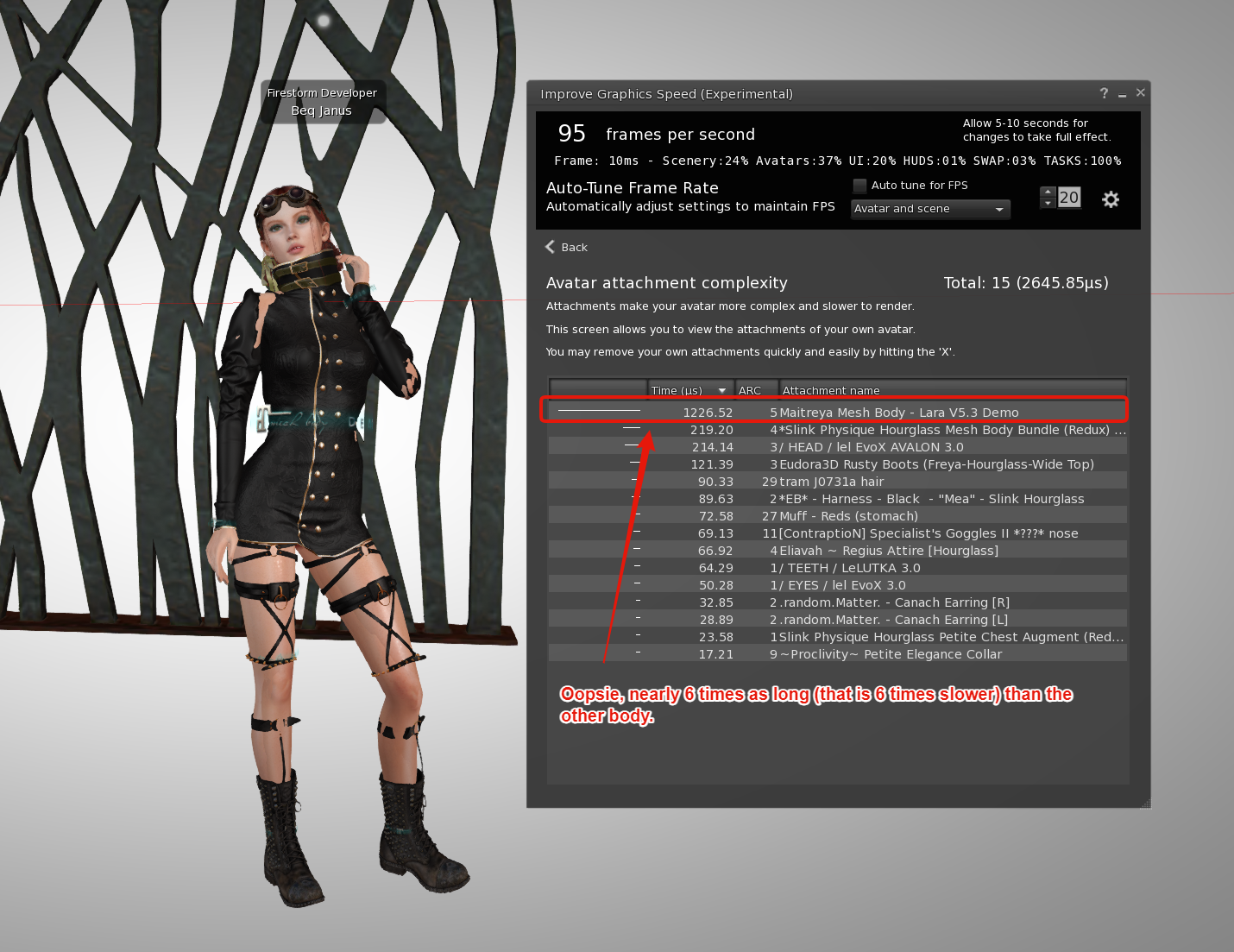 What this is showing is that the segmented bodies are significantly slower to draw than the unsegmented ones. Note too that while I happen to be demonstrating the Maitreya body here. It is certainly not the worst out there (far from it) it is, however, the most prevalent and the one that I hope beyond all other hope that the creator will provide a cut free option. May new bodies now require alpha layers and as such the push back from creators against supporting BOM properly is unsupported.

Soon (though in experimental form, as I want to get it into your hands to find out where the rough edges are) the feature shown here, will be in Firestorm and you'll be able to assess the rendering cost of your outfit and by implication the impact it has on others.

My original blog was really a plea to body makers to give us options, alongside their segmented models, to provide a weight compatible uncut version just so that we have the choice and don;t have to give up a hard-earned wardrobe to be a good citizen. Siddean at Slink did exactly this. The redux models are shipped with the original models making the arguments of "oh but this tiny niche requirement means I must have alpha cuts" a moot point.

Since those blogs were written back in the summer-time, we've seen a few things happen. Inithium, the makers of the increasingly popular Kupra body range, all of which have no cuts and perform well, is launching a male body that is also without cuts (uncut meaning something quite different in the male space ;-) ). Siddean Munroe, creator of the Slink bodies has launched an entirely new product range Cinnamon and Chai, two bodies both of which are minimally cut and in my tests perform at least as well as the redux.

It can cost you nothing too

In my first write up I inadvertently overlooked the entirely, 100% free option too. The open-source Ruth2 mesh body which has an uncut BOM only version. You can read all about Ruth2 and the her male counterpart  Roth2 on Austin Tate's blog and the bodies are available on the market-place.

Your choices for higher-performing bodies are increasing. Your CPU and more importantly your friends' CPUs will thank you for it. And watch out, not all new bodies, (or reborn old bodies) are improving matters, with creators rolling out new versions of problem bodies. 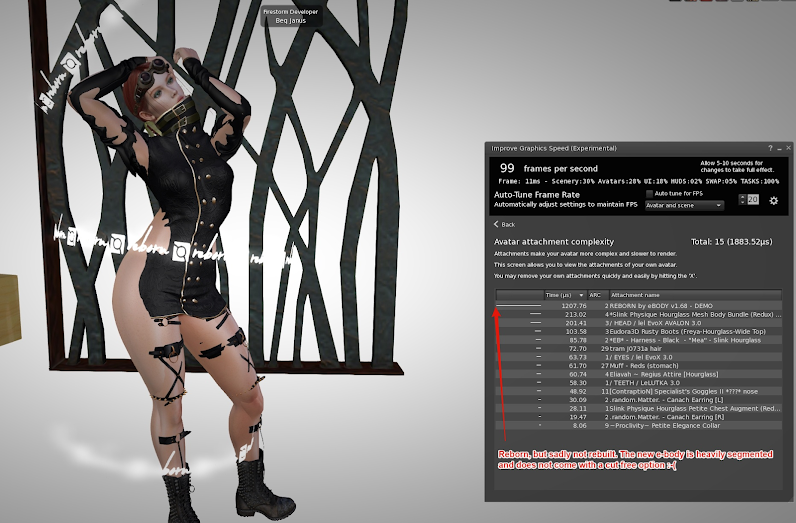 A point of clarification is needed too. While the cost of rendering the body is high other attachments all add up and the basic cost of just being an avatar is also a factor so in the real world you can't have 5 or 6  Beq's for every Sliced body in your nightclub, but you can ultimately have more Beq's or just better FPS.

Perhaps more significant for performance (though this is very tentative and it remains to be seen in practice) is news from Runitai Linden at yesterday's content creator user group meeting, that he is hoping to have some changes that directly address a large part of the problem that heavily sliced mesh bodies cause. My other blogs explain the concept of "batching" and drawcalls, Runitai's changes will (hopefully) bring improved batching to rigged mesh, cutting down the number of draw calls required. This is very early days and Runitai cautioned that the changes make many shortcuts and assumptions that may not survive contact with the real world.

I have everything from fingers to toes crossed in the hope this can happen. I would still urge you all to consider a low slice body next time you have a choice, request one from your favourite body maker or at the very least defer that purchase if the creator is not offering an option and take another look at the other offerings. While Runitai's rendering gymnastics may pull us out of the fire, we should never have been in there in the first place and with the hope that these changes will help a lot and make the difference less extreme, it will likely remain the case that a segmented body is just harder to draw and an unwanted burden.